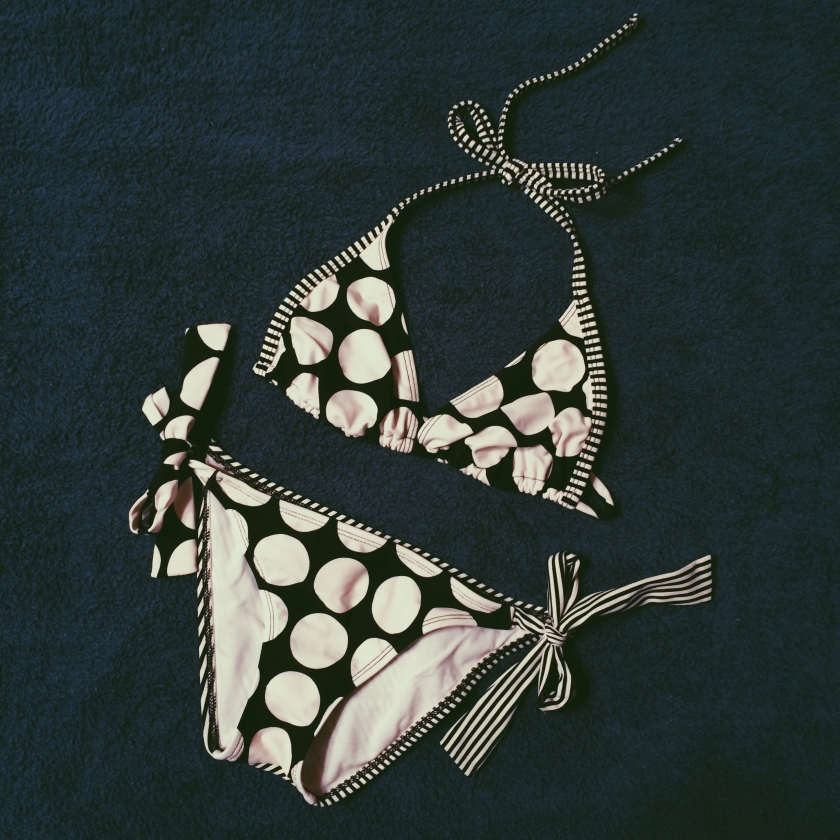 The following is a response to Jessica Rey’s speech regarding bikinis. Please watch the video here prior to reading:

In her speech, Rey basically argues that when going to the beach/pool, women should wear one piece bathing suits because bikinis promote men to perceive women as objects. As evidence, Rey cites a Princeton study which found that when men viewed pictures of women in bikinis, the area of their brains associated with objects (e.g. screwdriver) lit up, as well as the areas of their brains associated with first-person action verbs (e.g. “I push” verses “she pushes”). Now, I want to make it clear that I do not disagree with the notion that men may be inclined to objectify women in certain environments (e.g. at the beach where women tend to wear less clothing in general). I do have a modest background in evolutionary psychology, and I understand that we all have instincts that may seem controversial in today’s society, but that we have little to no control over (and that we may not even be aware of!); these instincts or adaptations (psychological and biological) have been beneficial to survival throughout human history.

However, there are several questions I have about the Princeton experiment that Rey failed to address. First of all, were the men in these studies viewing pictures of women in bikinis at the beach/pool,  against a solid color background, in the mall, at work/school, etc.? The context of the picture may have an impact on the areas of the brain that were lit up. Second, Rey mentions that when the men in the study viewed pictures of “modestly dressed” women, the areas of their brains associated with third person action verbs (e.g. “she pushes”) lit up, but there is no clarification as to what “modestly dressed” looks like. Were these men viewing pictures of women dressed in more modest bathing suits (e.g. one pieces) or normal clothing (and then we can break down normal further)? I could have looked into this further by looking up the studies, but I did not. Sue me, but I graduated with a degree in psychology a year and a half ago and after reading study after study for four years, I still don’t have the strength to open Google Scholar. Sorry. Anyway, if there were distinctions in the context of the pictures, Rey should have addressed them. I feel that it’s fruitless to compare an image of a woman in a bikini versus normal clothing and expect to get valid results because there are so many variables at play. Again, context matters.

Rey discusses how the bikini, when it first appeared, was not accepted by society but overtime became viewed as a “‘power suit'” of sorts. After discussing the Princeton studies Rey claims, “…wearing a bikini does give a woman power, the power to shut down a man’s ability to see her as a person, but rather as an object. This is surely not the kind of power that women were searching for, the power to be treated as an equal, to be seen as in control, and to be taken seriously. It seems that the kind of power they were searching for is more obtainable when they dress modestly.” So, we are discrediting the female power based on male perception even though the female is the one enacting the self-proclaimed power (by choosing what she wears) and originally perceiving it as powerful? Sounds sexist to me! With all due respect to Rey, I have to disagree with her completely. I would argue that If a man sees a woman in a bikini as an object, that’s his issue. We must stop blaming females for the way that men perceive them. Again, I am not stating that a man’s animal instincts are not at play when he views a half-naked woman; we are animals after all and biological instincts are inevitable. Yet, we are an astonishingly intelligent species. Even though a man’s brain may be promoting his objectification of a woman, he clearly knows in his rational mind that the stimulus he is looking at is an actual human being, equipped with thoughts, feelings, etc. 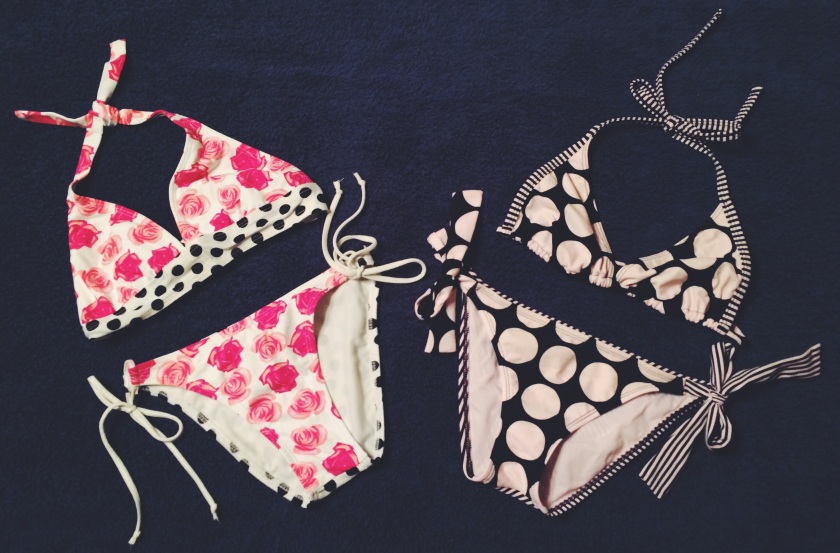 Furthermore, even if a man was not able to understand that a woman in a bikini is an actual person versus an object such as a tool, who cares? Again, that’s his issue. What do I care if some guy at the beach/pool views me as an object? The purpose of my life is not to ensure that all men view me as the intelligent, caring, funny (etc.) woman that I am because the focal point of my life is not to attract men! I choose to wear bikinis simply because I find them more comfortable than one pieces.. Furthermore, my fashion choices reveal little about my character. Bikinis should not be made out to be shameful, and reveal nothing about women other than simply the shapes of their bodies (and let’s be honest, seeing people in general in normal clothing gives a fair indication of body type – it’s not like a woman/man putting on a bathing suit suddenly reveals that she/he is thin, curvy, or obese). Considering all the complex dimensions of a person, including character and personality, the physical body is quite trivial. It’s time that people stop judging others (especially women) on their fashion choices. More importantly, it’s time that society stops shaming FEMALE CHOICES on the basis of MALE PERCEPTION of those choices.

When Rey states that a female “… shuts down a man’s ability to see her as a person…” while wearing a bikini, she is implying that females cause men to perceive them as objects. This is very similar to the notion that a female is inviting men to rape her by not dressing modestly, as if men just can’t help themselves when an attractive and possibly scantily clad woman meets their eye. Unlike before (when a female was enacting power by choosing to wear a bikini and that power was taken away from her based on male perception), in the case of male-on-female rape, the power is actually being placed onto the female because she chose to wear (insert any article(s) of clothing here, including bikini). In both cases, the action of the female was simply getting dressed, yet in one case it’s powerful and in the other case it’s not. It doesn’t make sense. Men demonstrate every day that they are capable of controlling their behavior, for many men see attractive women every day and somehow overcome the urge to force themselves upon them. Again, despite the animal instinct that may exist to objectify a woman, a man is able to recognize a woman in a bikini as an actual person, so in my opinion, Rey’s argument is not valid. Still, more thought needs to be given to how we (as a species) can better educate men to control their thoughts/behavior in response to women they find sexually attractive (and just women in general) instead of placing the blame on females, and dictating that females should alter their behavior solely to appease males.

During the last part of her speech Rey states, “…we need to teach girls that modesty isn’t about covering up our bodies because they’re bad; modesty isn’t about hiding ourselves, it’s about revealing our dignity. We were made beautiful in His image and likeness. So, the question I’d like to leave you with is how will you use your beauty?” She also states that the tagline of her swimsuit line is, “Who Says It Has to Be Itsy Bitsy?” To that I ask, who says it has to be modest? Men? God (and that’s a whole new can of worms)?

I do agree with Rey that women are influenced by society to dress more promiscuous at times (e.g. if a woman dresses modestly all the time, she may be seen as a prude, and thus, she should expose more of herself because men won’t find her sexually appealing at all). In this sense, I do understand where Rey is coming from in promoting modesty. To the notion that women should expose more of themselves, women who do dress modestly, or advocate for modesty may say something along the lines of, “Who cares if a man thinks I’m frumpy? Shouldn’t I be allowed to dress for myself and my comfort level?” To these people I would say, “YES! You should absolutely be allowed to choose how you dress without having to wonder how a man will perceive you.” Doesn’t that sound familiar? Yep, it’s exactly what I advocated for earlier when the situation was reversed. There is nothing wrong with dressing modestly, and great for Rey for designing her own swimsuits to ensure her comfort! My issue comes with the fact that Rey is promoting modesty largely in part because she seems to think that being perceived as a top candidate for a girlfriend or wife is more important than a woman’s choice and freedom to express herself. The bottom line is that women should be allowed to dress for themselves and their comfort level (whether that’s wearing a snowsuit or a bikini) without having to concern themselves about how men will view them.

In the last quotation, Rey is also implying that beauty is merely a function of modesty/promiscuity, but I would argue that beauty is not defined by what a person wears (or doesn’t wear), but rather by his/her character. And again, I have already argued that physicality and fashion choices reveal little to nothing about one’s character. Instead of hitting up the beach in a one piece to demonstrate my beauty, I choose to exhibit/use it by exercising my mind, standing up for what I believe in, and showing kindness and respect to others. I may have written this blog post in jeans and a tee-shirt, sweats, lingerie, or alas, a bikini, but my choice in attire is meaningless. What is meaningful, rather, and what reveals my character and dignity is simply what I had to say. For me, feminism is about understanding biological/psychological traits/adaptations, which do put females in the inferior position a lot of the time, and recognizing that we (women) do not have to be defined by them in this day and age. We have equal potential as men to survive in this world, yet still have unequal opportunity. Even though we have already made great strides in our fight, it’s far from over.