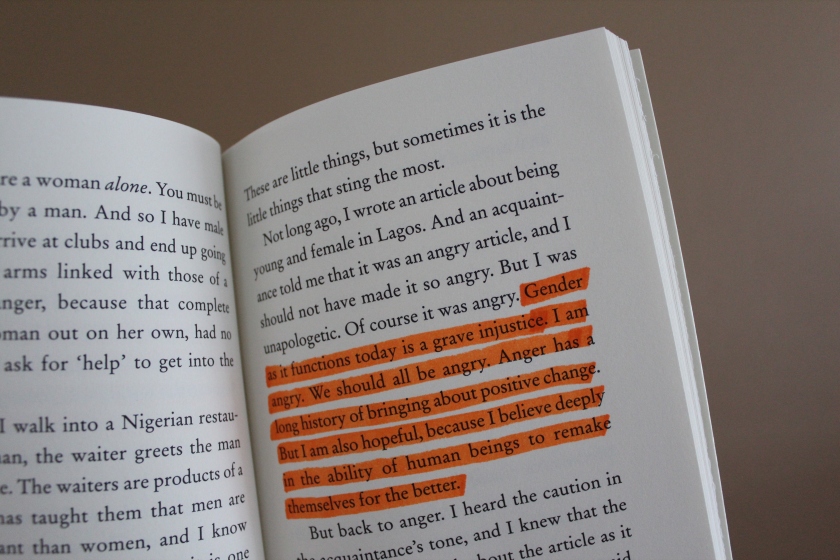 “The person more qualified to lead is not the physically stronger person. It is the more intelligent, the more knowledgeable, the more creative, more innovative. And there are no hormones for those attributes.”

“Gender as it functions today is a grave injustice. I am angry. We should all be angry. Anger has a long history of bringing about positive change. But I am also hopeful, because I believe deeply in the ability of human beings to remake themselves for the better.”

“What struck me – with her and with many other female American friends I have – is how invested they are in being ‘liked’. How they have been raised to believe that their being likeable is very important and that this ‘likeable’ trait is a specific thing. And that specific thing does not include showing anger or being aggressive or disagreeing too loudly.”

“We spend too much time teaching girls to worry about what boys think of them. But the reverse is not the case. We don’t teach boys to care about being likeable.”

“Gender matters everywhere in the world. And I would like today to ask that we should begin to dream about and plan for a different world. A fairer world. A world of happier men and happier women who are truer to themselves. And this is how we start: we must raise our daughters differently. We must also raise our sons differently.”

“What if both boys and girls were raised not to link masculinity and money?”

“…by far the worst thing we do to males – by making them feel they have to be hard – is that we leave them with very fragile egos. The harder a man feels compelled to be, the weaker his ego is. And then we do a much greater disservice to girls, because we raise them to cater to the fragile egos of males.” 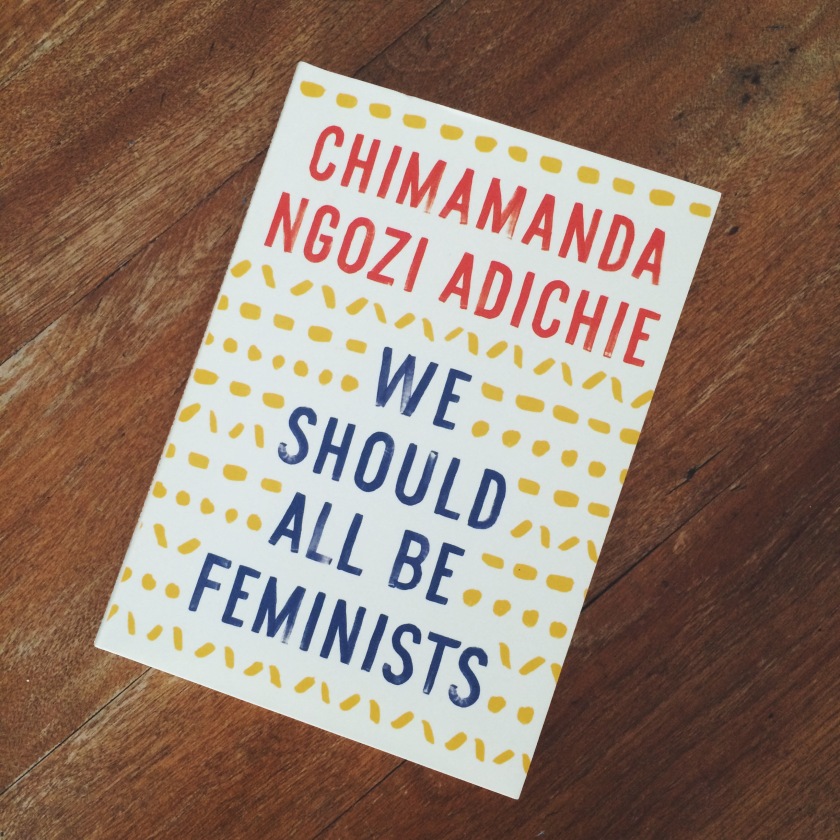 “…why do we teach girls to aspire to marriage, yet we don’t teach boys to do the same?”

“Our society teaches a woman at a certain age who is unmarried to see it as a deep personal failure. While a man at a certain age who is unmarried has not quite come around to making his pick. It is easy to say, ‘But women can just say no to all this.’ But the reality is more difficult, more complex. We are all social beings. We internalize ideas from our socialization.”

“We teach females that in relationships, compromise is what a woman is more likely to do.”

“We police girls. We praise girls for virginity but we don’t praise boys for virginity (and it makes me wonder how exactly this is supposed to work out, since the loss of virginity is a process that usually involves two people of the opposite genders).”

“We teach girls shame. Close your legs. Cover yourself. We make them feel as though by being born female, they are already guilty of something.”

“The problem with gender is that it prescribes how we should be rather than recognizing how we are. Imagine how much happier we would be, how much freer to be our true individual selves, if we didn’t have the weight of gender expectations.”

“Boys and girls are undeniably different biologically, but socialization exaggerates the differences, and then starts a self-fulfilling process.”

“Both men and women are resistant to talk about gender, or are quick to dismiss the problems of gender. Because thinking of changing the status quo is always uncomfortable.”

“Some people ask, ‘Why the word feminist? Why not just say you are a believer in human rights, or something like that?’ Because that would be dishonest. Feminism is, of course, part of human rights in general – but to choose to use the vague expression human rights is to deny the specific and particular problem of gender. It would be a way of pretending that it was not women who have, for centuries, been excluded. It would be a way of denying that the problem of gender targets women. That the problem was not about being human, but specifically about being a female human. For centuries, the world divided human beings into two groups and then proceeded to exclude and oppress one group. It is only fair that the solution to the problem should acknowledge that.”

“Culture does not make people. People make culture. If it is true that the full humanity of women is not our culture, then we can and must make it our culture.”

If you haven’t yet, be sure to watch Chimamanda Ngozi Adichie’s TED Talk and/or order the paperback transcript.